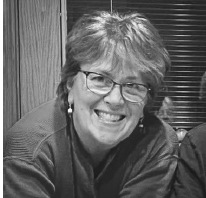 Cindy came to Pemberville in 1973 after marrying her soulmate Carl Lohrbach. After many years she retired from the EPA in Bowling Green. Cindy and Carl have three daughters, Jena (Roger) Whittaker, Sarah (Steve) Roberts, Kate Lohrbach and five grandchildren. Cindy and her family were constant participants in the kiddie parade with Cindy's original costumes. Her costumes were also used by the historical society and the Eastwood musicals. She was instrumental in creating the Love of Arts in Pemberville and transforms the downtown light poles into works of art during that time. She supports the Opera House with her many talents and assists with fund raisers. Her decorated Christmas tree is always unique . Cindy cochairs the Arts and Crafts show at the fair. She plants and maintains the post office landscaping as part of the Pedal Pushers group. You may have seen her beautiful garden totems she creates during the Pemberville Garden Parties and Harvest Gathering, which she helps to organize. She loves participating in Bunco, Mental Culture, and Genealogy Society groups. You can also find her organizing the Blood Drive at the legion. Her constant support and volunteering for so many groups in Pemberville make Cindy our outstanding citizen.